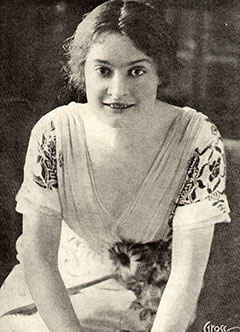 What’s the difference between vaudeville, burlesque, and revue shows like The Ziegfield Follies? 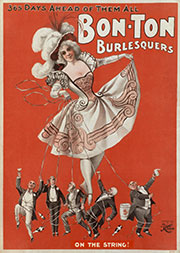 Burlesque originated in London in the 1830s and ran until the 1890s where it was most often a musical theater parody of a well-known play or opera or ballet. Brought to America in the 1840s, American Burlesque took a turn toward satiric and bawdy productions which usually incorporated exotic dancers. These performances were frequented by working-class men. Tickets were very inexpensive. 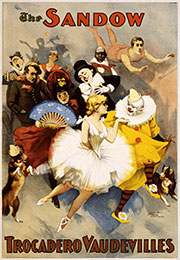 “Vaudeville grew out of that burlesque tradition when Tony Pastor and E.B. Keith recognized, in the 1880s, that middle class families would come to their theaters, and create more profit, if they had classier acts that wouldn’t offend or scandalize women and children. Types of acts included popular and classical musicians, singers, dancers, comedians, trained animals, magicians, female and male impersonators, acrobats, illustrated songs, jugglers, one-act plays or scenes from plays, athletes, lecturing celebrities, minstrels, and movies.” (Wikipedia) 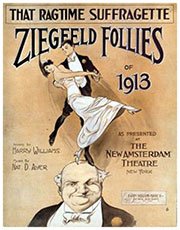 The Ziegfield Follies were on Broadway and then radio from 1907 to 1936. The costumes were lavish, the sets were splendiferous, and there were always Ziegfield Girls parading up and down long stairways in fanciful costumes. The acts were similar to those on the vaudeville stage. In fact, many performers moved easily from burlesque to vaudeville to Follies venues, especially the most well-known stars.

Teresa wouldn’t have dreamed of going on the burlesque stage. Because of its origins in burlesque, many people believed that vaudeville was only “one step up from girlie shows.” Vaudeville was attainable but the Follies, performed only in New York City, were beyond her reach when The Life Fantastic takes place. In 1913, Teresa was just beginning her career. After the last chapter of the book … where do you think Teresa’s career will take her next?