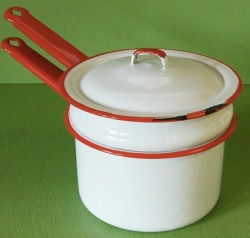 Thanksgiving makes me grateful for family and family traditions, especially those related to food. For the first time in many years, I don’t have to cook this Thanksgiving. But if we were eating at home, or contributing to a meal with friends, I would make the creamed onions. This tradition is handed down from my Great-Grandmother McKelvey.

When I was a little girl, any mention of her name sent a frisson of fear through me. Though she died long before I was born, she apparently ruled her household, outside of Youngstown, Ohio, with an iron hand. Many of her rules, which my mother obeyed when she visited, related to cleanliness and the spread of germs: Don’t toss the dishtowel over your shoulder; it will pick up germs. Always dry yourself completely before stepping out of the tub onto the bathmat. Wipe the kitchen counters constantly.

When I was older, I learned that Great-Grandmother had lost a son and a daughter to typhoid fever. My grandmother, who was the oldest child, also contracted typhoid; her hair fell out and she was frail for months. Great-Grandmother’s fear of germs was probably connected to the devastating experience of losing two children—and almost a third—in that pandemic.

On Sundays when she was a little girl, my mother and her parents drove to the McKelvey’s house for a required family dinner.  The rules were in full force on those visits, but my mother remembered that the food was sumptuous and tasty. My great-grandparents lived on a farm, so I assume that much of what they ate came from their garden and the animals they raised.

Creamed onions were one of my great-grandmother’s signature dishes, and as an adult, my mother believed that they were essential to the Thanksgiving meal. Mom prepared the onions ahead of time, since peeling them was labor intensive. Once cooked, she kept them warm in Great-Grandmother’s white enamel double boiler, which she had inherited—much to the distress of my mother’s aunts, who apparently coveted the pot. They were likely to exclaim, when they saw the double boiler: “Oh. So YOU got that!” (The aunts also disagreed as to whether the onions should be sliced, or left whole. Ours were sliced.)

The warming pot was similar to the one shown here, but with black handles. The bottom of the pot reminded me of a plump woman. The lid was pockmarked and the bottom was stained, but it did the job. When I was old enough to handle a paring knife, I helped Mom peel the onions. We stood side by side at the sink, tearing up as we slipped off the skins. After I was married, facing the challenge of my first turkey dinner, I called my mother to ask for the recipe and instructions. That phone call became an annual ritual. Every Thanksgiving, a few days before the meal, Mom and I discussed the creamed onions. Our conversations often segued into a family story, so I never wrote the recipe down. It was more fun to have those holiday chats.

Over the years, I’ve made onions in our Massachusetts kitchen; on a hot plate in a southern cousin’s country house (where the roux curdled); in a Vermont cabin; and in my parents’ assisted living facility. Once, my husband and I hosted a potluck Thanksgiving in our rented condo and our dear friend Lorni offered to bring the creamed onions.  I accepted; we had a big crowd and a small kitchen, so it helped to parcel out the jobs. A thick fog blanketed the roads on Thanksgiving Day. Lorni and other friends drove down from Vermont in a crowded mini-van. When a stop sign suddenly appeared in the gloom, Lorni slammed on the brakes—and the pot of creamed onions slid from the seat to the floor.  Her son sobbed because he’d never heard his mom “say those bad words;” creamed onions oozed across the van’s carpeted floor mats (which smelled oniony for months); and our friends arrived looking frazzled. Clearly, I should have made the onions.

My mother has been gone for three years. Sadly, I can no longer call her to ask for advice on food—or anything else. You can find many creamed onion versions online, but I hope that this one, based on my pre-turkey phone calls with Mom, is close to Great-Grandmother’s recipe: